YOU ARE HERE: Home / News / Where the Rubber Hits the Road 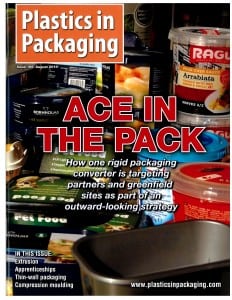 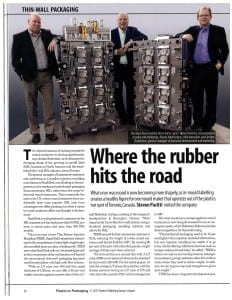 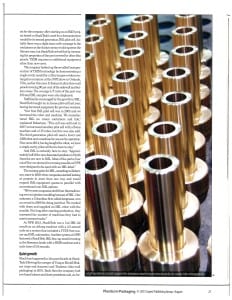 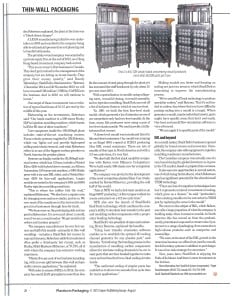 For a printable version of the article, click here: PiP AUGUST 2015 WEB EDITION 26-28

What once was round is now becoming more shapely, as in-mould labelling creates a healthy figure for one mould maker that operates out of the plastics hot spot of Toronto, Canada. Steven Pacitti visited the company.

The vibrant business of making moulds for round containers is slowing significantly says Jordan Robertson, as he discusses the changing shape of the growing in-mould label (IML) business in North America and the established thin-wall IML industry across Europe.

The General Manager of Business Development and Marketing at Canadian injection moulding manufacturer StackTeck was alluding to the progression in the market towards shaped packaging that incorporates IML, rather than the easier-to-decorate round containers. This is especially the case in the US, where round containers have traditionally been more popular. IML may have advantages over offset printing, but when it comes to round containers offset was thought to be dominant.

StackTeck is well positioned to comment on the IML business as it has built more than 80 IML systems in recent years and more than 300 IML moulds.

This is an area where Thin Recess Injection Moulding (TRIM), StackTeck’s proprietary technology for the manufacture of ultra-light-weight injection moulded parts can play a leading role. TRIM uses what StackTeck calls an ‘advanced approach’ to thin-out portions of the wall section well beyond the conventional thin-wall packaging approach used for polyolefins with high melt flow indexes.

«With an L/T ratio over 500 and thin panel thickness of 0.25mm, we can offer a 35 per cent weight reduction against current state-of-the-art,» said Robertson, during a meeting at the company’s headquarters in Brampton, Ontario. «More importantly it provides thin-wall sections using a standard packaging moulding machine and allows for IML.»

TRIM secured its first commercial customer in 2014, reducing the weight of a 64oz round container used by fast food firm KFC. By covering 90 per cent of the part with ultra-thin panels, weight savings of 40 per cent were achieved.

«It’s twice as thin as a normal thin-wall. A L/T ratio of 600 can be achieved whereas the standard for thin-wall is 250-300. For the initial project, we took the average L/T across the container, with the thicker portions having an L/T ratio of 270 and with ultra-thin panels of 520, which averaged out to 390.»

But what started as a concept applied to round containers is now being showcased for use on rectangular packs, which Robertson believes provides direct competition for thermoforming.

«Thermoformed packaging used to be 15 per cent lighter than injection moulded alternatives, but now injection moulding can match it or go lower whilst offering additional features such as tamper-resistant break tabs,” he added. «TRIM is better now and we are running trials on rectangular containers, giving customers ultra thin walls in areas where they need to reduce weight. In addition we can improve top load strength at a given part weight.»

TRIM has been something of a long-term development project for the company after starting as an R&D project based on StackTeck’s need for a demonstration mould for its second generation IML pilot cell. Initially there was a slight issue with warpage in the containers as the thicker areas would squeeze the thinner ones, but StackTeck solved this by increasing the proportion of the part covered by ultra-thin panels. TRIM requires no additional equipment other than new cores.

The company backed up the so-called ‘next generation’ of TRIM technology by demonstrating a single-cavity mould for a 32oz tamper evident rectangular container at the NPE show in Orlando, USA, earlier this year. It featured ultra-thin-wall panels covering 90 per cent of the sidewall and bottom areas. The average L/T ratio of the part was 520 and IML samples were also displayed.

«Our first IML pilot cell was in 2005 and we borrowed the robot and the machine. We manufactured IML ice cream containers and lids,» explained Robertson. «This cell was sold and in 2007 we borrowed another pilot cell with a Swiss machine and a US robot, but this was also sold. The third generation pilot cell used a lower cost ABB robot and a machine for one-cavity operation. Now, since 2014, having bought the robot, we have a single-cavity pilot cell that is here to stay.»

And IML is certainly here to stay. «Approximately half of the new decorated products in North America are now in IML. Most of the parts (4 out of 5) we showed in running molds at NPE were designed to be used with an IML label.»

The turning point for IML, according to Robertson, came in 2003 when companies started looking at projects in more than one way and would request IML equipment quotes in parallel with conventional non-IML options.

«We’ve seen companies shift from thermoforming over to injection moulding because of IML. One customer, a Colombian firm called Acegrasas, won an award in 2009 for doing just that. We worked with them and supplied an IML robot with the moulds. Not long after starting production, they increased the number of machines they had to meet increased sales.»

At NPE 2015, StackTeck ran a 1×4 IML lid mould on an Arburg machine with a 3.5-second cycle on a system that included a YUDO hot runner and IML automation.  Another system at NPE featured a StackTeck IML 6 oz. cup mould running in the Ilsemann booth with a BMB machine at a cycle time of 3.9 seconds.

A lot has happened in the past decade at StackTeck following the merger of Unique Mould Makers (caps and closures) and Tradesco (thin-wall packaging) in 2001. Back then the company had two brand colours and three presidents and, as Jordan Robertson explained, the plant at the time was a «blank sheet of paper».

A LEAN manufacturing initiative was undertaken in 2005 and resulted in the company being able to estimate job process time and planning and to handle bottlenecks.

The privately-owned company was acquired by a private equity firm at the end of 2013, as a Hong Kong-based investment company took control. «This is our owner’s first business in Canada. They don’t get involved in the management of the company but are letting us invest heavily. They grow their money quietly,» said Randy Yakimishyn, StackTeck’s chief executive. «Between December 1, 2014 and November 30, 2015 we will have invested C$6 million (US$5m) CAPEX into the business. And in 2016 we will continue to invest.»

One target of these investments was a reduction of typical lead times of 10-15 per cent by the middle of this year.

Elaborating on the investments, Robertson said: «Our latest machine is a 500-tonne Husky HyPAC injection moulding machine, which boasts half the fill time of other machines.»

Core equipment inside the 100,000sqft plant includes state-of-the-art machining centers, Fanuc robotic systems supplied by 2Ri Robotics, which run ‘lights out’ and provide high-speed milling and robotic removal, and what Robertson refers to as one of the the biggest surface grinders in North America for grinding plates.

Systems on display inside the 30,000sqft technical centre, which has 12 bays, include a Netstal Elion 4200 with hybrid drive concept, an Athena Automation 150-tonne test machine, a 300t Husky press with six axis IML robot, and a Netstal Synergy 4200 for thin-wall applications.  Larger moulds are tested in the company’s 500T and 600T Husky injection molding machines.

«This is where the rubber hits the road,» explained Robertson. «We also have a repairs area for changing cores and new stacks, and so on. We own most of the machines in this test centre and get a lot of customers through here for trials.

«We focus more on the prototyping side and are good collaborators. It’s never just about a mould, even if we are a mould maker. We get mould only orders and turnkey projects.»

The company manufactures its own hot runners and half of its moulds — primarily in thin-wall moulding — has a StackTeck hot runner. In caps and closures, Robertson adds that customers often prefer a third party hot runner such as Husky, Mold-Masters, or YUDO all of which the company has extensive working experience.

«Ninety-five per cent of our business is packaging, with an even split between thin-wall and specialty closure applications,» he explained.

With sales in excess of $52m in 2014, the company has used LEAN principles to more than double the amount of steel going through the plant yet only increase the staff headcount by about 10 per cent since 2001.

With a specialisation in moulds with collapsing cores, in-mould closing, in-mould assembly, and co-injection moulding, StackTeck can reel off a list of industry firsts in which it was involved.

«In 1991 we built the first four level stack mould, which garnered a lot of attention as one of our competitors only had two-level moulds. At the time, many lids producers were using a pair of Two Level stack moulds. We could provide a fully-balanced hot runner.

«A Three Level Mould was introduced later for lids and short containers. Our mould was running on an Engel 650T e-speed at K’2013 producing 16oz IML round containers. There are lots of moulds of this type in North America and with a 3.3-sec cycle time, it’s very fast.

The company was pivotal to the development of the novel co-injection plastics Klear Can (trademarked by Kortec/Milacron), providing the cold half of the mould.

NPE also saw the launch of StackTeck’s KoolTrackTM technology, which combines the company’s ability to simulate heat transfer in the part and moulding surface components with a proprietary bonding technology.

«Using heat transfer simulation software enables us to establish the optimal 3D cooling channel geometry for any plastics part,” said Rozema. Introducing the bonding process in the manufacture of moulding surface components allows for intricate cooling channels to be cut in steel parts that are then bonded together to make cores and cavities that have ideal cooling circuits inside.

«The conformal cooling of simpler parts has enabled us to shave two seconds from cycle time for many applications.»

Making moulds run faster and focusing cooling are just two areas that StackTeck are innovating in order to improve the manufacturing process.

«We’ve used KoolTrackTM technology to produce speciality cutlery,” said Rozema. «But it’s not limited to cutlery. Anywhere that you have difficulty putting cooling into a mould is a target. Where geometry is small, maybe individual inserts, parts might have specific areas that don’t cool easily. Our heat and mould flow simulation software is very advanced.  We can apply it to specific parts of the mould.»

The Canadian company was actually one of a rare breed during the global downturn as it grew in the US market, based on projects from overseas. It also sees new opportunities in several sectors, one of which being horticultural, which Robertson says has significant potential for the ultra-thinwall TRIM technology.

«There are lots of competitor technologies here but it represents minimal investment in tooling, which gives us a chance,» he said, “…particularly when existing moulds can be converted to TRIM just by replacing the cores in a mold.”

We return to the subject of IML, which Robertson calls a large proportion of what the company is building today when it comes to moulds. In North America this has moved on from the predominantly promotional cups and ice cream tubs of yesteryear to a range of packaging, from cosmetics to high-volume products such as margarine and sauces/dips.

«We were at the start of the IML growth in the Americas because we offered not just the mould, but full turnkey systems in addition to part design. It was a low-risk strategy for converters.»  Now, years later, StackTeck is enjoying the fruits of its labour. And with more investment on the horizon. 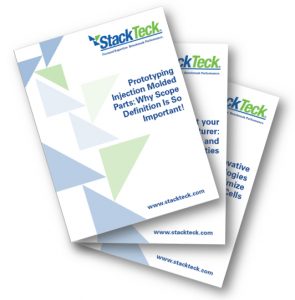